The Galahad update of Albion Online confirmed an expected success and provided promising figures for the official release. 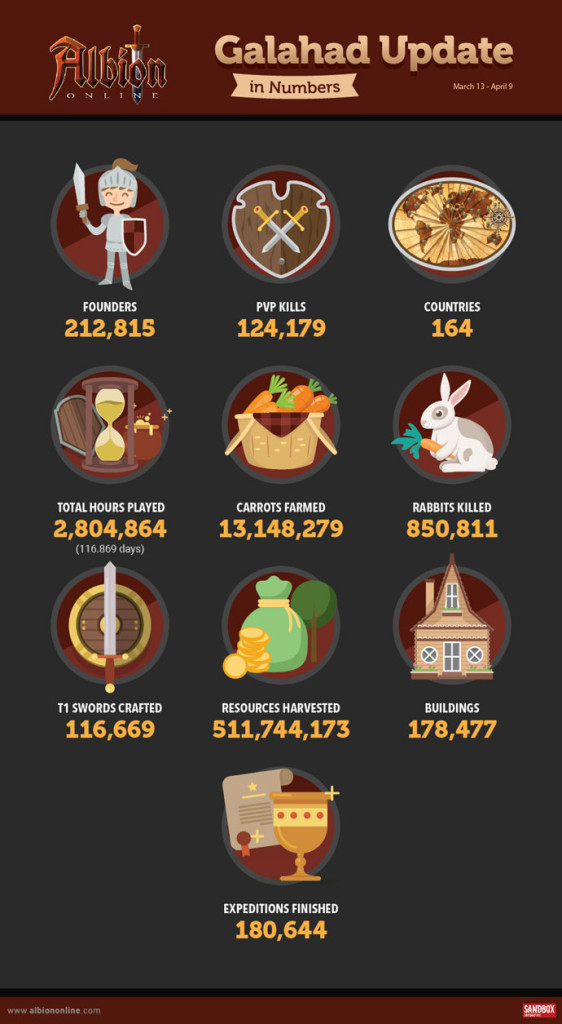 For almost a month, Sandbox Interactive has continued to improve Albion Online. In an interview, the developers talked about some of the new things to come. The update Galahad, reveals us some data collected since its release. Concretely, no less than 212,815 founders supported the game. All these supporters come from 164 different countries where players, with their feedbacks, have helped improve Albion Online. All these people have totaled 2,804,864 hours of play, that is 116,869 days spent in the world of Albion Online! 178,477 constructions were built and 116,669 pieces crafted. Everyone participated in the economy by collecting 511,477,173 resources. There are 180,644 completed shipments. And this is just the beginning since the release of the game is in three months. You will find all the numbers of these statistics below.

All these figures show the investment of the Albion Online community.

I still want to emphasize the sacrifice of 850,811 small lapinous. Even big ones, and also between-ages, were killed for trying to eat some of the 13,148,279 carrots. Incidentally, the rabbits were also victims of the fights of an unprecedented violence in PvP which saw the death of 124,179 characters.

All this shows how well the players and the rabbits are prepared. All waiting for you on July 17, 2017 for the official release of Albion Online. Don’t forget to check out the rest of our Albion Online articles here on UPAlbion where gamers can buy Albion Online Gold online!