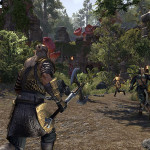 During the E3 2017 conference in Los Angeles, Bethesda announced the arrival of two new DLCs for The Elder Scrolls Online. Horns of the Reach and Clockwork City, these expansion names, were presented with a first trailer that you can see at the middle of the article.

The company also seized the opportunity to announce that The Elder Scrolls Online has reached 10 million players, and that the userbase of its MMORPG continues to grow steadily on all platforms.

A release date for DLCs has not been widespread, so we expect any updates from Bethesda in the coming weeks.