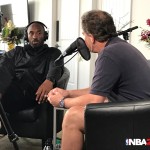 NBA 2K18 will be available on September 15 on PC, Switch, PS4, PS3, Xbox One and Xbox 360, first in digital format and then in physical. 2K has announced that in the area of commentators, the game will feature guests of the likes of Kobe Bryant and Kevin Garnett, whom we can see in the last published trailer of the game:

While Kobe Bryant has been five times winner of the ring with L.A. Lakers, Kevin Garnett has been champion with the Boston Celtics in the year 2008. Both join the team of commentators that is habitual in the saga, composed by Chris Webber, Steve Smith, Doris Burke, Brent Barry, Greg Anthony and Clark Kellogg.

NBA 2K18 will feature new features in the GM and MyLeague modes, which will make the gaming experience much more immersive. In turn, the new All-Time Teams have recently been presented.