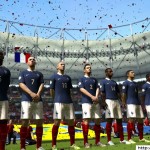 Be ready for the FIFA 15 release date in late September

EA is pushing the Ultimate Team hard in FIFA 15 with a new Ultimate Team mode and a special FIFA 15 Ultimate Team Edition that is $10 more than the normal version. For this higher price gamers unlock up to 40 Ultimate Team Packs to build their new team. The packs arrive over 40 weeks, so you can’t just unlock the best FIFA 15 team off the bat. This version does include an unlocked Lionel Messi player to help you get started, plus celebrations, the Adidas All-Star Team, special Adidas shoes and historic uniforms.

One thing that the FIFA 15 release will not offer is full access to the Brazil Club teams. Due to licensing issues FIFA 15 will not include Brazilian Club teams off the bat, which means some users will not be able to play as their favorite teams. The Brazil National Team that played in the World Cup is still in FIFA 15, so you can still command Neymar and others, just not in Club competitions. EA Sports explains that negotiations could deliver these teams later.

If you want to buy the digital version of FIFA 15 on release day you should be able to buy a version on PS4 and Xbox One.

There is still no FIFA 15 PSN store pre-order listed, but with Madden 15 already on the store, we could see FIFA 15 soon. For users that plan to buy on PS4, expect the option to download FIFA 15 up to a day early and then start playing right at midnight Eastern on the FIFA 15 release date.

On the Xbox One there is no way to pre-order a digital version of FIFA 15 or to download it early for faster play. Xbox One digital downloads typically unlock at midnight Pacific, or 3 AM Eastern.

If you own an Xbox One you can use EA Access to play FIFA 15 early. This is only on Xbox One at this time, and you’ll need to pay $5 a month or $30 a year. This service offers access to old EA titles and early play on FIFA 15 and other EA Sports games as well as 10% off digital EA purchases. The service will launch soon and promises up to 5 days of early play, with progress that carries over to the full version.