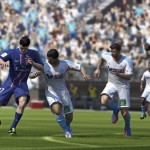 Most notably there’s the removal of pro clubs for FIFA 15 on Xbox 360 and PS3. A bold, and some would say insane, move by EA. Especially given some of the PES noises being made from gamescom. Instead, the team have focused on Career Mode, Ultimate Team and Team Management, as well as authenticity in the form of leagues, teams and kits.

They’re also keen to stress that gameplay has been an area that’s seen a lot of work, but all of our playtests have been on Xbox One or PS4, so we haven’t seen any of this first hand. Set Piece Control will feature, which we covered in our first write up on next gen, and the new agility, man to man battles and correct contacts are also set to make an appearance on Xbox 360 and PS4.

Team tactics like park the bus will be available as well as all of the listed changes to Team Management. From a visuals/authenticity side of things the new players models will feature, as will the Turkish league and the full Barclays Premier League licensing package.

Including the new skill games, the full list of modes is: Ultimate Team, Career Mode, Tournament Mode, Online Seasons, Online Friendlies, Co-op Seasons, Kick Off and something called Learn-to-Play (FIFA Basics) which we’ve seen nothing more on as yet but is unlikely to be aimed at the kinds of people that read futhead.

So overall a bit mixed, I’m sure people playing on Xbox 360/PS3 will be pleased that EA have brought the new leagues and licensing to that generation of consoles, but clubs could be a big miss for some people.